A C-type natriuretic peptide (CNP) analogue (BMN-111) is about to progress to phase 2 in its development road to prove it could be useful for the treatment of achondroplasia, the most common cause of disproportionate dwarfism. This is the first pharmacological approach to treat the bone growth arrest caused by the over activity of the fibroblast growth factor receptor 3 (FGFR3) in the growth plate cartilage to reach this milestone. And could turn to be the first solution to improve the health outcomes of the children affected by the mutation in FGFR3, by reducing clinical complications derived from the restricted bone growth seen in achondroplasia (reviewed here).

However, BMN-111 is not alone. More recently, other natriuretic peptides, related or not to CNP, have been explored in a couple of studies. For instance, in a paper published earlier this year, researchers worked with a fusion molecule called NC-2 made of the active part of CNP and the basic part of an antibody. In their experiments with a mice model of achondroplasia they found that the bone growth was restored under exposure to NC-2 (1; commented here).

Now, the work from another investigator deeply involved in the research of natriuretic peptides seems to have the chance of bringing more potential options for the treatment of achondroplasia. But, before starting talking about the Dr. David Vesely's submitted patent, let's make a brief review of the natriuretic peptide family.

The natriuretic peptide family is composed by small molecules made of short and similar amino acid chains and structures. The most known of them are the atrial natriuretic peptide (ANP), the brain natriuretic peptide (BNP) and CNP (figure 1) and they are products of three genes, NPPA, NPPB and NPPC, respectively. However, the NP family has other companions, some which do not share the typical ring structure. (2,3)

In past articles in this blog we have reviewed the way proteins are created, through the two phenomena called transcription and translation. Basically, a DNA fragment containing a gene is “read” and transcribed (transcription) into a RNA chain (the messenger RNA, mRNA) inside the cell nucleus. This mRNA travels to the cell cytoplasm and is read and translated (translation) into an amino acid chain, to generate a new protein. Both proteins and peptides are made of amino acids, and the core difference between them is the number of the amino acids they contain. A protein could also be called polypeptide. To learn more about transcription and translation you could visit this previous article.

ANP and its brothers

As usual, however, things are not that simple when it comes to biochemistry. Sometimes A does not simply turns to B as described above. Scientists are discovering that in an increasing number of cases, a gene may have information to generate more than one product. There are genes that contain, for instance, codes for a protein and for specific kinds of RNAs not linked to the translation process, which have been called non coding RNAs. And there are other genes where the mRNA will give origin to more than one polypeptide, or to several peptides. Sometimes, the polypeptide resulting from the translation may suffer another process where the molecule is cleaved (cut) in smaller ones. This is exactly what occurs with the product of the NPPA gene transcription and translation. The polypeptide resulting from the reading of the NPPA gene is the source of four different active peptides, the most familiar being ANP. (3)

Researchers have identified that the NPPA gene gives origin not only to ANP but also to the following peptides: long acting natriuretic peptide (LANP), vessel dilator (VD) and kaliuretic peptide. As they are mainly expressed (produced) in heart muscle cells, they have been called cardiac peptides or hormones. All of them have similar effects on the body vasculature, with more or less potency in causing vasodilatation and/or diuresis among other relevant effects in hemodynamics. (3)

However, these peptides have been calling attention for several other effects in other areas beyond cardiology. Dr. Vesely's group has been exploring the effects of these peptides in several forms of cancer, and especially VD, showing that they have the ability to strongly inhibit cancer cell growth and to drive them massively to death. (4)

Well, how could small peptides like VD be useful for the treatment of cancer?

You might remember, from other articles related to CNP in this blog, that, in achondroplasia, CNP is a positive player in bone growth, stimulating an enzyme chain that crosses with the main signaling pathway used by the mutated FGFR3 (Figure 2).

In brief, FGFR3 uses at least three signaling pathways to exert its effects in chondrocytes, but it looks like that the most important one is the mitogen activated protein kinase (MAPK) pathway. (5) The MAPK cascade is also one of the most important mechanisms by which most cancers' cells are able to multiply and survive. CNP signaling intersects with one of the trigger enzymes of the MAPK pathway, reducing or inhibiting MAPK activity. This action seems to explain the positive effect in bone growth of the CNP analogue BMN-111.

Chondrocytes, the core cells of the growth plate, the masters of bone growth, are unique because the effects of the MAPK pathway in their physiology are inverse of what happens in all other cells. In other words, except for growth plate chondrocytes, MAPK enzymes are growth triggers for all other kinds of cells, including cancer cells. (6) 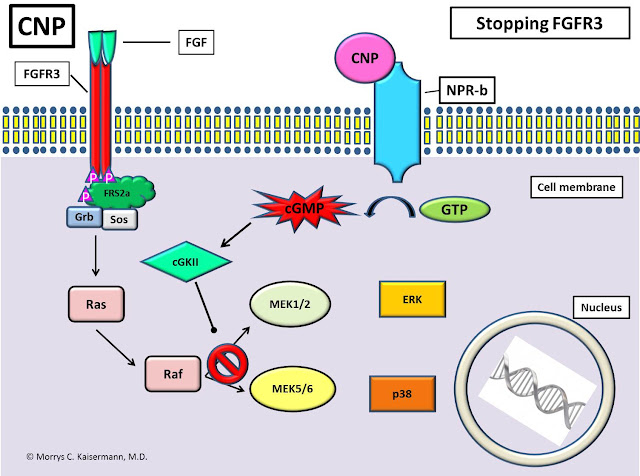 This year, Dr Vesely submitted a patent (7) pledging that VD could be an option for the treatment of achondroplasia. Having new strategies to treat any condition is a wonderful perspective. However, there are several questions which would need answers to allow a good evaluation about the potential of this peptide to be used to rescue bone growth in achondroplasia. For instance, despite VD and the other cardiac peptides have been discovered decades ago, to date it doesn't seem that their cell receptors have been specifically identified, although there is evidence that they do exist.(9,10) Why is this important?

Currently, one of the requirements for any new compound to become a medicine, is to have its mechanism (s) of action elucidated. By understanding, from the beginning, how a given molecule works, scientists can do better predictions of its efficacy and safety.

The patent document describes the results of an interesting study exploring the in vitro effects of VD and CNP in osteoblasts (the main cells in bone tissue responsible for bone building) (8). However, it doesn't mention if there are other studies exploring the effects of VD in chondrocytes or other cells bearing the mutated FGFR3, growth plate models or in vivo testing in animal models of achondroplasia. The proposal of using VD for the treatment of skeletal dysplasias is extrapolated for its already known mechanisms of action in other cells.

I think that there is already published evidence that might point to VD as a potential therapeutic strategy for achondroplasia. Nevertheless, there is need for more specific information regarding how it would be working in chondrocytes, both in vitro and in vivo. It will be also important to understand how VD would be used for long term in growing children, given its known effects in hemodynamics, an issue that doesn't seem to be of critical relevance for CNP.


Disclosure: Figure 1 shown in this article has been retrieved through a simple search with Google Images and came from freely available content, according to the respective editor. It is reproduced here for illustration purposes only and its source is due cited.

On last October 26th, I had the privilege of participating in the First International Dwarfism Congress of Portugal, which was held in Lisbon. The event was organized by a strong non-for-profit organization called Rarissimas. Rarissimas has been working to address the social and assistance gaps which impact the individuals affected by rare conditions, including the multiple forms of dwarfism.

The congress was organized to raise awareness about the many unmet needs of individuals with dwarfism, starting by the medical, nutritional and physical aspects, to political and social assistance and inclusion. I was invited to speak about the potential pharmacological therapies for achondroplasia.


The event has been enriched by some important organizations from Europe, such as  Fundación Alpe, which has been a relentless fighter in favour of individuals with dwarfism. Alpe has brought specialists who talked about the medical, nutritional and physical care, but also about the social and political aspects of dwarfism. One specific talk by Cristina González Villar, Technical Director of Alpe, was specially relevant because of the core message it brought. I asked Cristina, who also have a rare bone dysplasia, her permission to reproduce her talk here in the blog. The translation from Spanish was done with the aid of Google Translator, with my final revision. I tried to keep the sense and meaning of the expressions which could have been lost, as the translator is not able to capture subtleties.

3. Be disabled OR to have a disability?

At this point and reminiscing Shakespeare in Hamlet: 'to be or not to be, that is the question!'. In our case to be disabled or to have disabilities? Am I disabled or do I have a disability or different ability? That is the question we need to ask and to take to this society that looks only at mere appearance. I am a normal person who has a disability that limits certain aspects of my life, but I have many capabilities that differentiate me from the rest, who sometimes simply doesn't see. It's time to open your eyes and see beyond the different appearance because you will lose the opportunity to meet people who seek only to be equal in a society that only highlights the difference.

Within a few years, the society, the greater and better part of society, will no more have a humiliating stereotype of people with dwarfism or, at least, will have another view that may oppose to it, one which will mean normal: people with dwarfism in a variety of professions, families, participating in public life. To achieve this it is necessary that we make ourselves known as we really are, make our voice heard, make us visible.

I believe that to know is to respect and I keep holding on this concept because I believe in this every single day: when someone learns about the other or others respect, or at least a conditional respect, arises simply due to that knowledge. To see that someone is not a puppet, a caricature, a parody, it is like unmaking a costume. By keeping their eyes open to see the person that appears behind the costume, the respect due to every human being by the mere fact of being human, the dignity, also appears.
Many Thanks


Here goes the link for the congress program (in Portuguese and English).

The future and the present

I think that her message is of special relevance. Although there are several potential therapeutic strategies being explored for achondroplasia and other forms of dwarfism, they are supposed to improve only the health of the future generations, growing children, because these therapies can only influence developing bones. However, there are clear current and urgent unmet needs for the adult individuals with dwarfism, and they deserve due attention now.