Biomarin, the developer of vosoritide (BMN-111), the first potential therapy for achondroplasia to reach clinical development, has just announced that the first child has been enrolled in the phase 3 study, in Australia.


This is the press release:

SAN RAFAEL, Calif., Dec. 12, 2016 (GLOBE NEWSWIRE) -- BioMarin Pharmaceutical Inc. (NASDAQ:BMRN) announced today that the company has initiated a global Phase 3 study for vosoritide, an analog of C-type Natriuretic Peptide (CNP), in children with achondroplasia, the most common form of dwarfism. The first child enrolled in the study was at a site in Australia.
"Based on the positive results seen in our Phase 2 study, we look forward to continuing to investigate vosoritide," said Hank Fuchs, M.D., President, Worldwide Research and Development at BioMarin. "We are grateful to the children and their families, who have participated in the earlier study and are participating in this Phase 3 study."
The Phase 3 study is a randomized, placebo-controlled study of vosoritide in approximately 110 children with achondroplasia ages 5-14 for 52 weeks. The study will be followed by a subsequent open-label extension. Children in this study will have completed a minimum six-month baseline study to determine their respective baseline growth velocity prior to entering the Phase 3 study. Vosoritide is being tested in children whose growth plates are still open. This is approximately 25 percent of people with achondroplasia.
The primary endpoint of the study is the change in growth velocity from baseline over one year in children treated compared to placebo.  The company also plans to augment the growth velocity data with assessments of proportionality and functionality.
In addition, BioMarin is planning a separate Phase 2 study evaluating the effect of vosoritide in infants and toddlers. Vosoritide has been granted orphan drug designation in both the United States and Europe.
(...)

Here goes a link for the complete press release:

Treating Achondroplasia: results from the fourth cohort of the phase 2 study with vosoritide have been released

Biomarin, the developer of vosoritide published a press release today describing results of the fourth cohort of the phase 2 study.

Below, I reproduce the tables showing the main results divulged today.

You can find the complete press release here.

The developers of vosoritide (BMN-111), the first potential therapy for achondroplasia, will present further results of the ongoing phase 2 study during the next American Society of Human Genetics (ASHG) Meeting to be held in Vancouver in October.

This is a link to a description of the phase 2 study at ClinicalTrials.gov:

A Phase 2 Study of BMN 111 to Evaluate Safety, Tolerability, and Efficacy in Children With Achondroplasia (ACH).

In summary, according with the investigators, vosoritide has been showing safety and evidence of efficacy to allow its continuing development as a therapy for achondroplasia.

The 46% increase in growth velocity reported now is lower than the figure (50%) provided in a previous report of the first six months of therapy.

It is interesting to learn that the participants who were in the lower dose cohorts (3.75mcg/Kg/day and 7.5mcg/Kg/day) had a further increase in their growth velocity (65%).


To read the complete abstract of the results that will be presented at the upcoming  ASHG meeting in Vancouver on next October, follow this link.

Noteworthy, reviewing previous press releases from Biomarin about BMN-111/vosoritide and achondroplasia I found out that most of the data provided in the above mentioned abstract was already published in April 20th, here.

Since there is no real new data disclosed (at least in the meeting abstract), the attention now falls over the results of the ongoing fourth cohort, which is using a higher dose of vosoritide (30mcg/Kg/day) and the planned phase 3 study.
Posted by Morrys C. Kaisermann at 11:14 AM 3 comments: 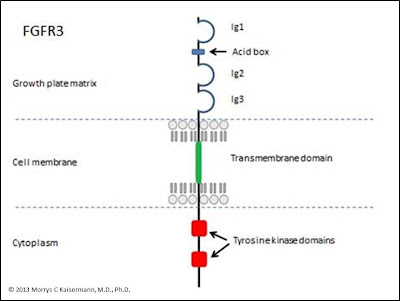 A questão do momento ideal